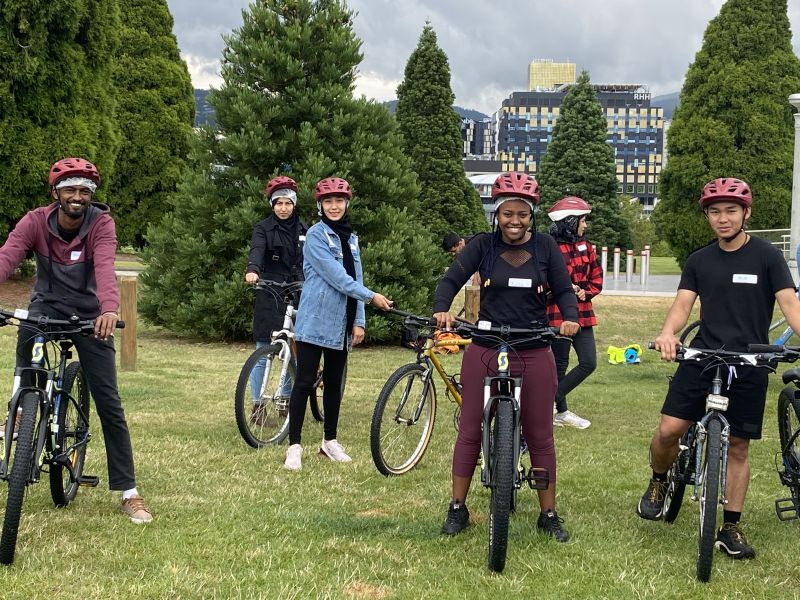 Students from migrant and refugee backgrounds in TasTAFE’s Young Migrant Education Program (YMEP) are getting extra help to ride to classes thanks to a bicycle education program being delivered by an alliance of cycling interests.

Funding from local resident, Dr John Hunter, has been used by Hobart Bike Kitchen, Cycling South, Bicycle Network Tasmania and My Ride, Sandy Bay to get students their own bikes and helmets, learn about their bikes and road safety, and basic bike handling skills.

Today the students participated in a bike handling and riding session at the Hobart Regatta Grounds with Bicycle Network Tasmania.

About 40 students aged between 18 and 25 are part of the project, with many of them never having ridden a bike before, and few having access to a bike.

Students have been in Hobart between one and six years and come from countries such as Nepal, Bhutan, Afghanistan, Ethiopia, Eritrea, Burma, Iraq, Syria and Thailand.

Many live close to the Intercity Cycleway, making riding a cheap and easy transport option for them as well as removing the fear of having to ride on roads.

Students indicated that they wanted to learn to ride for fun, exercise, to save money and have more transport independence and to help fight climate change.

TasTAFE YMEP student, Rufta Gebrhit, from Ethiopia (pictured centre) grew up in a refugee camp and said she had had had little opportunity to ride a bike before coming to Tasmania.

“The last time I tried to ride a bike was in 2015. It was hard and I promised myself I’d never touch it again. But I like to try new things so I’m happy to try again.

“We’ve been learning a lot – about safety, wearing a helmet and the security of the bike.”

The project involves the following elements:

Hobart Bike Kitchen: Volunteers have been working with about 20 students since mid-January to teach them to fix donated bikes which then become the students’ bikes; further sessions are being planned with remaining students.

Cycling South: Has presented classes to educate the students about the parts of the bike, road safety, locking bikes and where to ride in Hobart.

My Ride Sandy Bay: Provided discounts for equipment such as helmets and locks.

Bicycle Network Tasmania: Is running 3 bike handling and riding sessions for students and loaning bikes for use during the sessions.